Dressed for Christmas Success: Chester’s storefronts are decorated with gingerbread

Businesses across Chester city centre have been decorated with gingerbread as part of a festive theme that has swept through shops, restaurants, hotels and visitor attractions.

Storefronts have been adorned with gingerbread men, women, houses and treats, as businesses have taken part in CH1ChesterBID’s Gingerbread Window Dressing competition, which was launched in late November and received thousands of online votes from Cestrians. 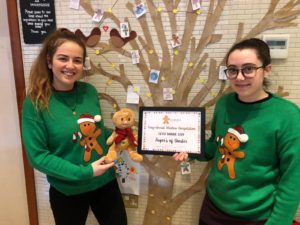 Watergate Street’s Weasel & The Bug scooped the gold prize, with Zugers of Chester taking silver and Hope House Charity Store claiming the bronze award. The displays were praised by the public for their imagination and festiveness, having all been created by the in-house teams in each store, rather than professionals.

The Hope House Charity Store display was designed in partnership with The Kings School, with the school children creating a giant gingerbread house and paper gingerbread people. Their decorations have added to the city’s gingerbread paper chain, which can be seen at the new Gingerbread Village and The Forum Shopping Centre.

With points awarded for creativity and originality, the eleven competing windows were judged by members of the public via Facebook, with every Facebook Like acting as a vote in favour of the display. Over 50,000 people viewed the competition between November 22 and December 15. 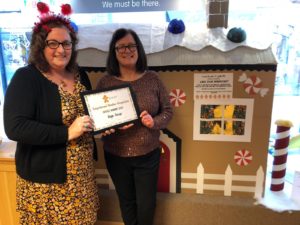 Emily Ghazarian, Events Manager at CH1ChesterBID, said: “Chester is a wonderful destination to visit at Christmas and really captures the essence of the season, with decorations and lights adorning the Rows and streets.

“This year though, to add to the magic, we invited stores to participate in the wider gingerbread theme and decorate their storefronts and windows to showcase not only their offering but Chester’s imagination and Christmas spirit.

“The feedback from shoppers and Cestrians has been great and the windows received a fantastic response on our social media channels. A huge thank you to our city centre stores who took such time and care to create incredible window displays.”

Children’s store, Weasel & The Bug received a case of wine and certificate for winning the competition, having received an impressive 815 votes through Facebook.

Photos:
Above: Faye from Weasel & The Bug with CH1ChesterBID Welcome Ambassador Luka Morrell who presented the Gold certificate and case of wine.
Top Right: Georgie and Jenny from Zuger’s of Chester with their mascot Gingey!
Bottom Right: Helen & Vicky from Hope House Charity Shop with the gingerbread house created in partnership with The King’s School.