That Beer Place has a new home and everyone’s invited to sup, chat and make new friends

Fans of That Beer Place in Chester Market are now raising a glass to the craft beer bar’s new home on Foregate Street.

The bottle shop and taproom is beginning life anew at bigger, better premises, where new customers and collaborations are key.

Lisa and Dale Lord (pictured, above) moved into the former Berketex Bride building at the end of April. They still sell cans and bottles in Chester Market, but the specialist beer shop in Foregate Street is an exciting next step for the couple who first opened in the Forum Shopping Centre three-and-a-half years ago.

“Everything is migrating over to Foregate Street,” says Dale. “This will be our lifeblood going forward.”

The new shop is an amped-up version of the market bar and allows them to do more of the things they want. The move was made in response to the imminent closure of the current market and was a process that took more than 12 months. 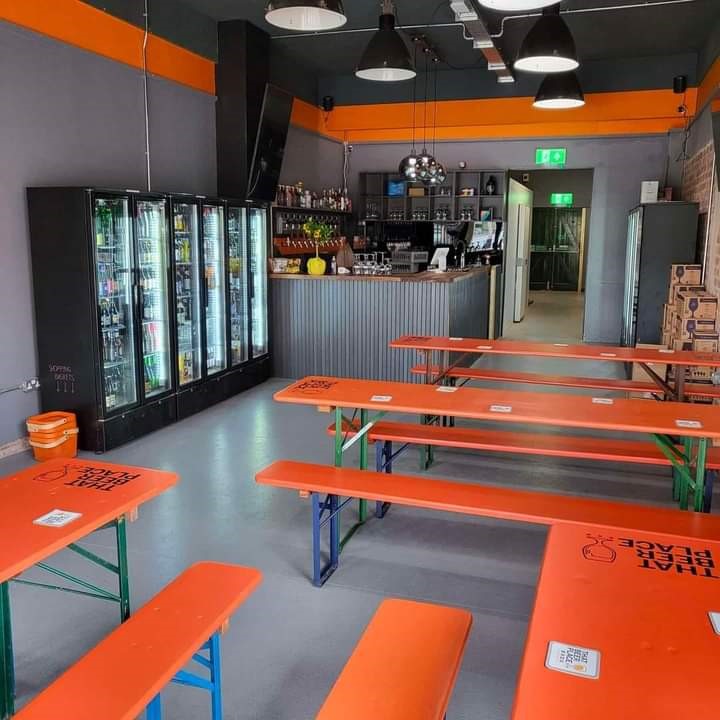 Inside the Foregate Street shop

“We had to move to save our business,” adds Lisa. “The choice was to close completely or find somewhere else.”

With the help of the Bounce Back Loan Scheme and access to grants, they squirrelled away as much money as they could to enable them to start the next chapter.

“I’ve also done a lot of the work, physically,” says Dale. “I built the bar to try and keep costs down and a friend helped me a few days a week.”

Upstairs, there’s a spacious tasting room and they’ve added a smaller room which is earmarked as a pop-up kitchen. The plan is for other traders to use the kitchen and for the team to offer a food and beer pairing.

“We want to work with others as much as we can to keep the community spirit we had in the market,” says Dale. 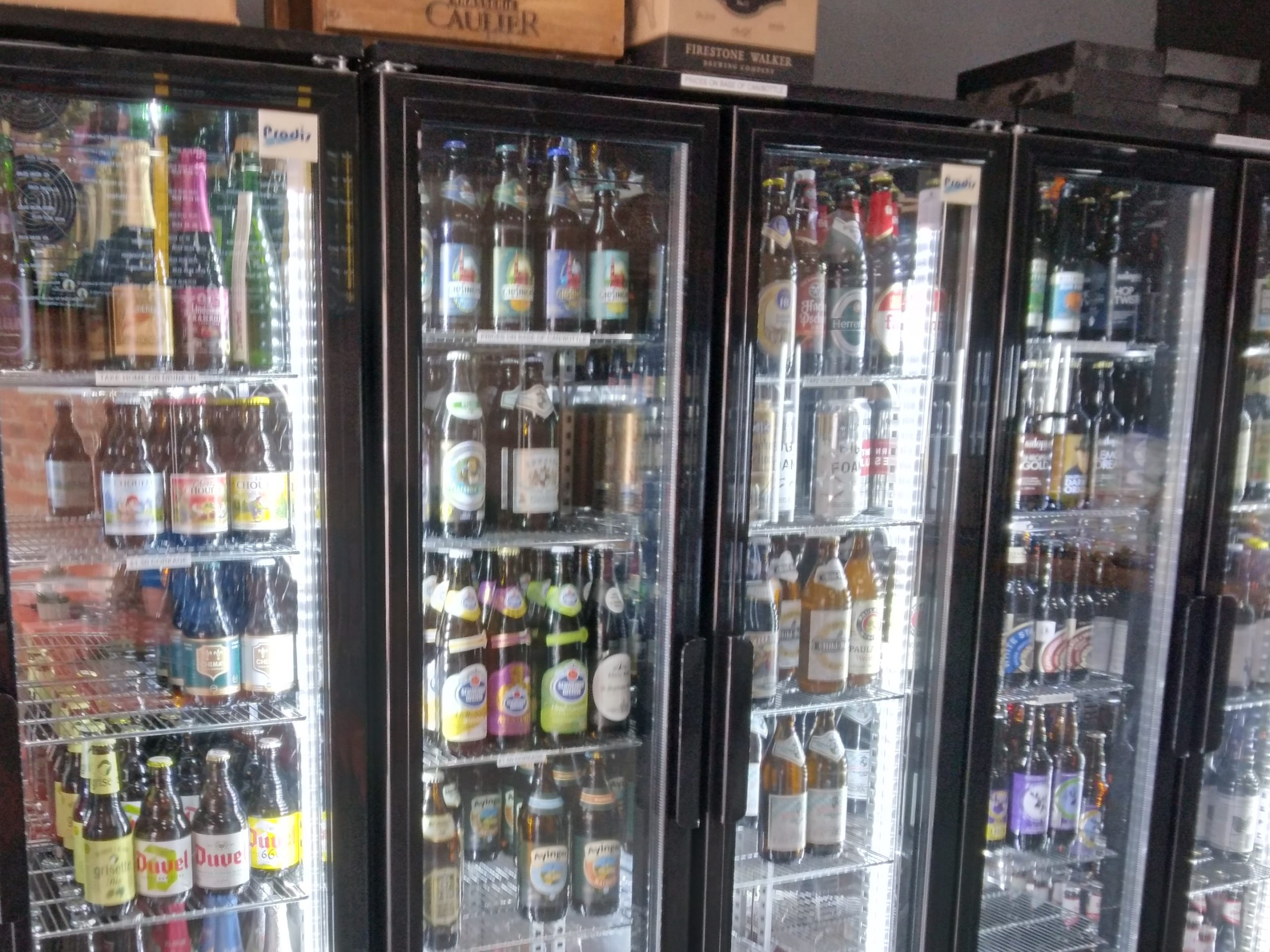 The fridges are full of bottled and canned beer and cider

It’s obvious that Lisa and Dale love what they do.

They were complete newcomers to the beer industry before they opened up the bar in the market and describe themselves as corporate office monkeys before they opened the beer shop and taproom. “On the opening night I poured my very first pint,” says Dale.

“We loved beer but we’d never served it before,” says Lisa. “We liked to drink it and knew a reasonable amount about it but we’d never been on the other side of the bar!”

While many of their neighbours in Princess Street are moving over to the new, purpose-built market hall as part of the Northgate development, the Lords made the decision to move – lock, stock and barrel.

“One of the reasons we didn’t apply for the new market was that we would have had to reduce what we could offer,” says Dale. “Here we can take what we’ve got in the market and add to it.

“We can have more evening sessions where we can run training events like Meet The Brewer and Meet The Cider Maker and make it more of an experience,” he adds.

They are keen to mirror the success of previous, pre-lockdown events. At their first beer pairing they offered beers to customers more used to wine and fine dining. But by the time they had tried beers made with ginger and seaweed, had tasted a cherry beer blended with a maple syrup and a 12% stout, the customers had discovered a whole new world of beer, and had fun to boot.

“The first beer they had on the night was a beer cocktail, which no-one was expecting!” says Dale. “We like to play with people’s expectations.”

The move to Foregate Street, he adds, is an evolution, and the couple and their five other team members now have the space they need to pass on their passion for beer and cider. 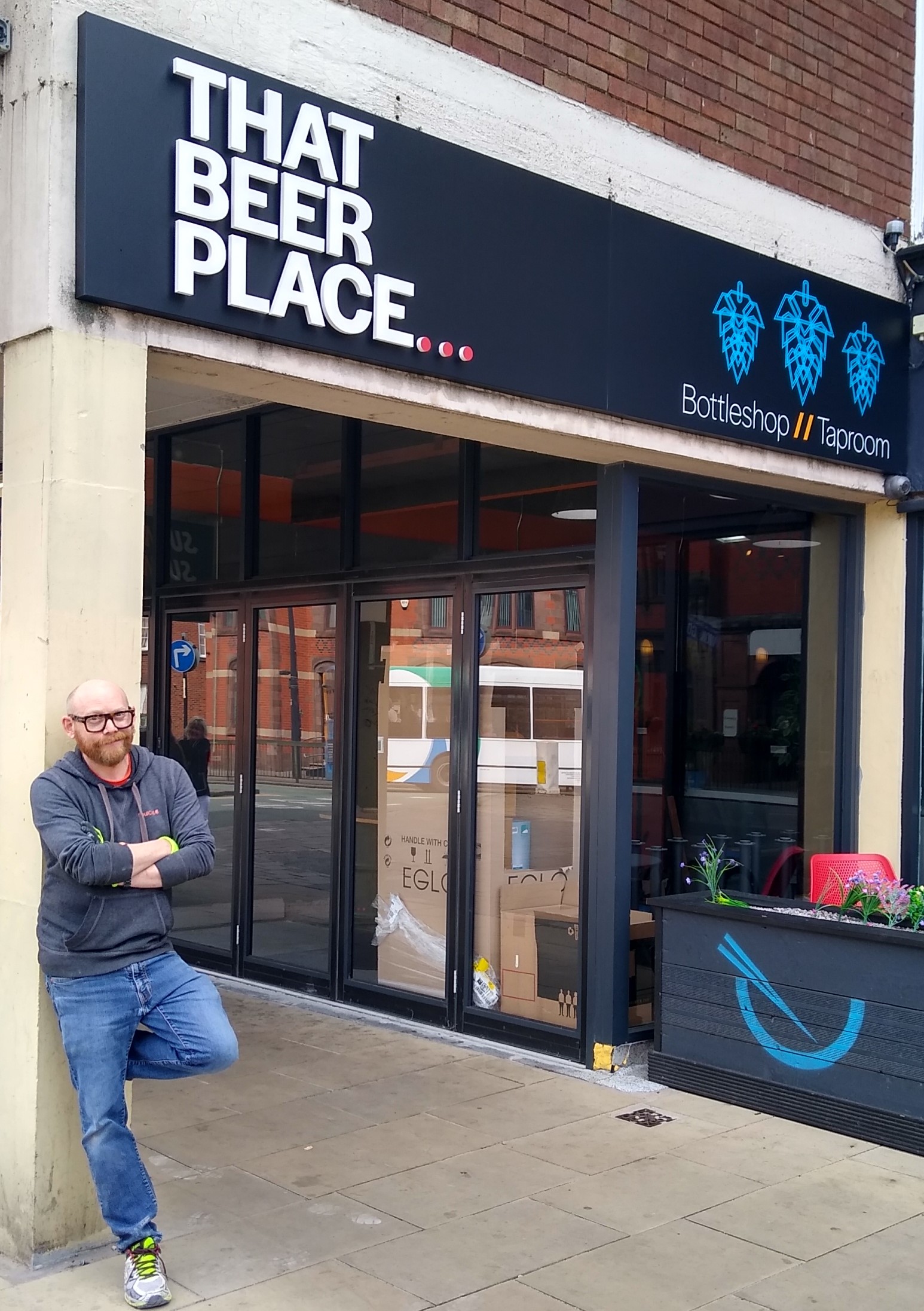 Staff members are professionally trained so they know the history of beer and understand the brewing process. Importantly, they can also distinguish between 52 different beer styles. They also have a good knowledge of the different cider making techniques found in regional cider production from Spain, France and from the east to the west coast of the UK.

It’s an expertise that comes in handy when you consider the number of products available.

“We have 350 beers and around 100 ciders,” says Dale. “Our team needs to know those inside out so that they can talk to customers about them.”

“Germany and Belgium  feature quite heavily and we have quite a few American beers,” says Lisa. “We also have a lot of UK breweries and we like to support the local ones. Craft beer has really exploded.”

They stock Tynt Meadow, which is England’s only Trappist brewery, as well as cherry and peach beers. There’s one made with walnuts and a pink guava beer that has been aged in barrels for three and a half years.

“We also have elderflower beers, wheat beers and amazing lagers,” adds Dale. “Anything from 0% to 14%. Some of the low-alcohol stuff is selling really well and we’ve seen an increase in the number of people who just want to take a break from alcohol but still want a beer.

“To cater for those people even more in the coming weeks we’re going to put a 0% on our tap. Also, a lot of people don’t realise gluten-free beers exist – and they are really tasty. Having those options for people is great. We want to try and make beer and cider as acceptable to as many people as possible.” 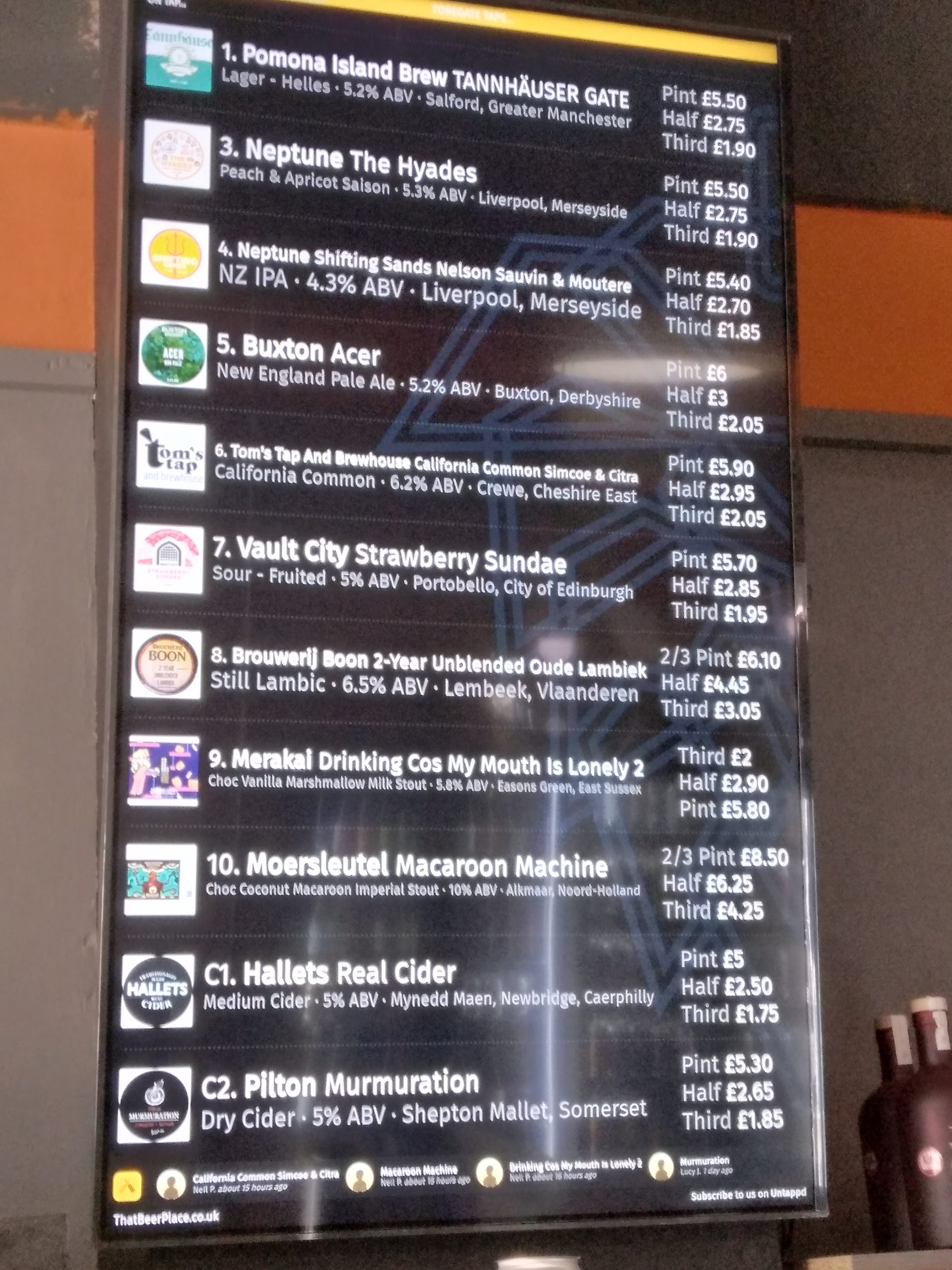 While beer and cider take centre stage at the shop, they also cater for those who prefer other drinks.  “We have soft drinks, wine and gins. We stock local gins like Three Wrens – an amazing local gin producer – and we’ve got Weetwood, a brewer that also makes gin and vodka,” adds Dale.

And if you can’t stay, you can take away.

“Everything is for taking away, even our draft lines,” says Dale.

They have an in-house canning machine so they are able to can beers directly off the draft lines. They also sell growlers.

“Growlers are a three-and-a-half pint glass jug that’s totally refillable, so a nice, sustainable way of taking beer home,” Dale explains. “Customers just bring the glass jug back, clean, and we will refill it.

“We’ve done that from day one, back in 2018 when we started, but it really kicked off when lockdown started because lots of people couldn’t drink in pubs or bars. Our take-out options became quite popular.”

The couple says that a three-and-a-half pint growler of  IPA off-tap is perfect for those planning a barbeque or at-home event. Or they can take their pick of the huge array of  bottles and cans they have in the fridges. 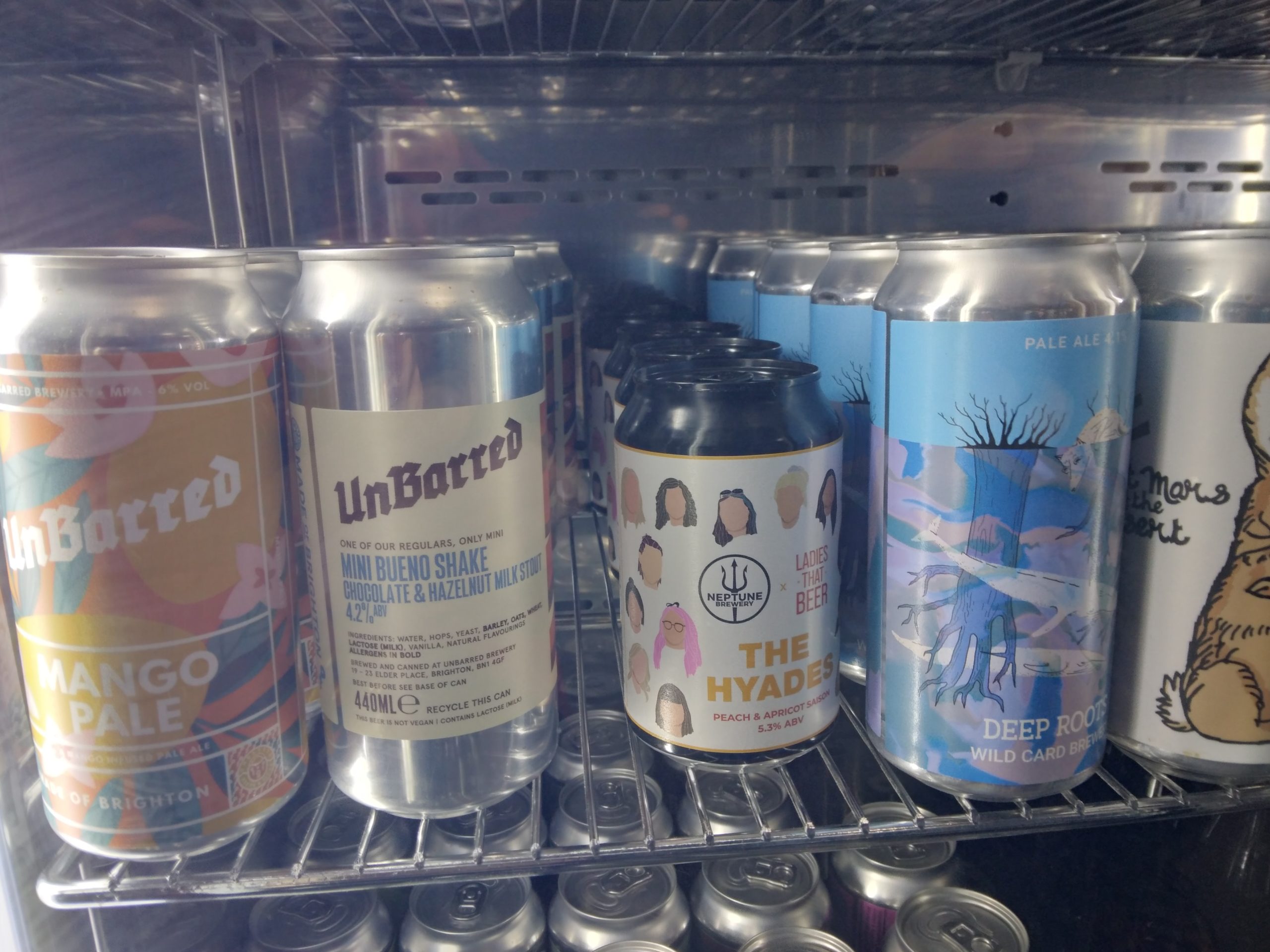 They are also turning their attention to collaborations with other local businesses to highlight beer’s amazing flexibility with food.

“We can do a lot more collaborations than we were able to do before,” says Lisa. “We hosted at other people’s venues but we can do them at our own venue now.”

In lockdown they offered tastings over Zoom and they worked with restaurants such as Chef’s Table, Veeno and Vin Santo.

“We wholesale beer to them and we’re also working to train their trade teams on beer,” explains Lisa.

“A lot of restaurants naturally understand wine but not beer, so our role is to try to get into the hearts and minds of their customers and them as a team so they realise that beer matches really well with food. They just need to understand what goes with what.”

While Lisa is originally from Yorkshire and Dale from Lancashire, they have both lived in Chester for more than 20 years. “It’s definitely a place I love to call home,” says Dale. “I adore this city.”

They love the fact too, that the local business community has given them a warm welcome to Foregate Street.

“We’ve had people from Wetherspoon and Atina Kitchen – and ones that we weren’t expecting – come in to congratulate us,” says Lisa.  Nearby businesses have given them free coffee until they can get a staff room and coffee machine up-and-running.

“Having come from the market where the expectation is that you will help each other, coming on to the high street I expected us to be on our own,” Dale admits.

“It feels like we have a community here already, and it’s great,” adds Lisa.

“People are being really supportive. They’re glad of the variety that’s now on the street and everyone has been surprisingly supportive. I was really quite shocked and taken aback by it – I think it’s brilliant.” 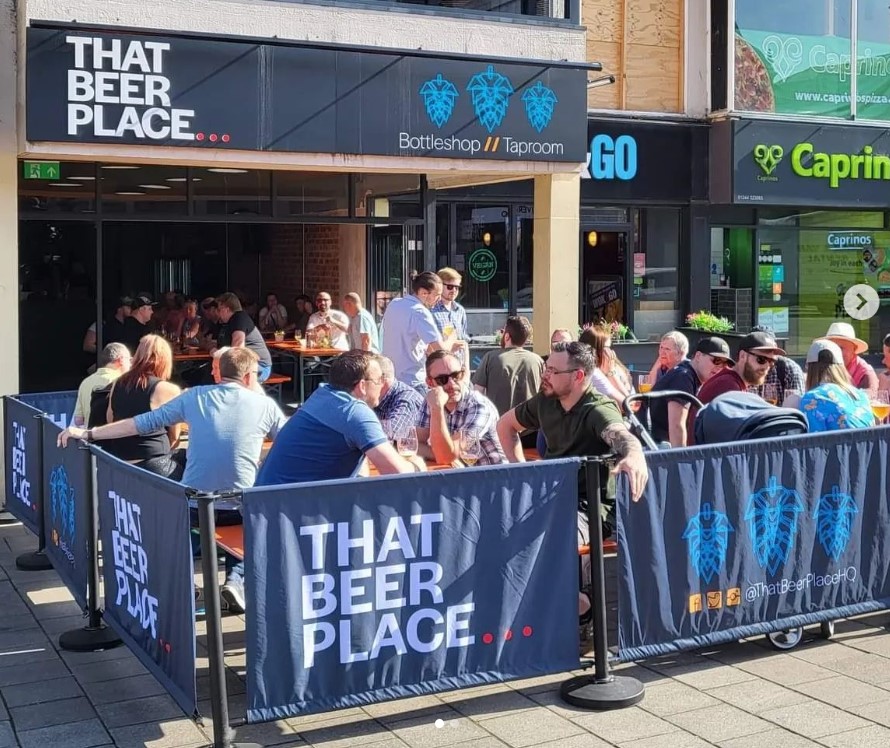 They plan to open 12-9pm Monday to Wednesday and until 11pm on Thursday, Friday and Saturday. They will close at 10pm on a Sunday.

They are perfectly happy for people to bring in food from outside, in the same way they were in the market. It’s all part and parcel of a night out, they say. Dogs – alongside their owners – are welcome, too, and there are free dog treats at the bar, along with fresh water.

“People who drink with us are not the sort of people who drink to get drunk. They’re people who just want a nice drink, so we get people coming in with their buggies. It’s a family safe space,” says Dale.

Anybody can come in and drink at That Beer Place in safety. It has signed up to The Everyone Welcome Initiative to create a welcoming, safe environment.

Moving definitely wasn’t a cheap fix and they had four months of 90-hour weeks building their new premises. But it was a labour of love and Dale and Lisa are excited to be able to share it with more customers than ever.

“It doesn’t feel like a job when you’re chatting to customers and they’re really excited about the beer that you’ve given them a taste of,” says Dale.