The cast for Grosvenor Park Open Air Theatre’s The Comedy of Errors has been unveiled.

The cast for Grosvenor Park Open Air Theatre’s The Comedy of Errors has been unveiled.
30th July 2020

The cast for Grosvenor Park Open Air Theatre’s The Comedy of Errors has been unveiled.
Posted in Chester News

They are one of the only company of actors currently working in the UK.

Rehearsing via zoom and then outdoors at the open-air theatre, the cast has its own ‘bio-bubble’ to remain as safe as possible. 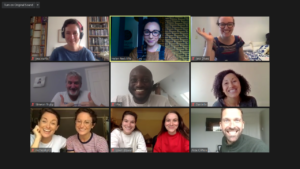 Returning to the park to reprise their 2014 roles, and known best as the Puck twins from 2013’s smash hit A Midsummer Night’s Dream, Danielle and Nichole Bird as Antipholus of Ephesus and Antipholus of Syracuse, (The Prince and the Pauper, New Vic Theatre), Anton Cross who played Barney in 2016’s charming Stig of the Dump as Luciana and officer 1 (other credits include Romeo in Romeo And Juliet, The Orange Tree Theatre) . Jessica Dives, last summer’s Feste in Twelfth Night as Balthasar and musical director (other credits include Duke of Burgundy in Henry V, Grosvenor Park Open Air Theatre, Guess How Much I Love You, Selladoor). Danielle Henry as Adriana known in Chester for her role as Host in Merry Wives of Windsor 2015, (other credits include My Brilliant Friend (National Theatre); Hidden (Manchester Camerata).  Lowri and Mari Izzard as the Dromio twins (Lord of the Flies, Theatre Clywd / Sherman Theatre) and Simeon Truby as Pinch / Second Merchant, previously for Storyhouse in A Little Night Music and The Crucible (other credits include the Wizard in Wicked, Apollo Theatre)

Alex Clifton will direct and Jess Curtis will design.

We are so delighted to have this company! Some park veterans. All with huge skill – fabulous technique and understanding of how to play to audiences. Energy, love of the trade, great kind spirits and serious about the play. All hardworking. They come with a diversity of experiences and perspectives and a variety of skills: musicianship, singing, physical skills. All of them are wonderful, compassionate, detailed, humane and incredible storytellers. They can’t wait to be with an audience – to connect with, to play with and to. Roll on next weekend!’

The actors are working in a controlled bio-bubble and are tested regularly. They are rehearsing on Zoom or in the outdoors, but never inside.

At the park 20% of the normal seating capacity is on sale to allow for safe social distancing. The theatre’s stage-side deckchairs are making way to provide further distance to the performers.  Entrance times are staggered to avoid a queue. Part of the ticket price is a donation which helps manage the risk in case of a local lockdown and this is a model the producer is trialling to enable future productions to take place economically.

Find out more at grosvenorpark.co.uk. Becoming a Storyhouse Member costs £4 a month, sign up now at storyhouse.com