The Business Improvement District (BID) team is campaigning for a second five-year term and has outlined a range of further improvements to continue boosting the prospects of Chester city centre.

CH1ChesterBID’s vision is to create a city centre ‘fit for the future’, with the introduction of city-wide Wi-Fi and a diverted giving scheme, just some of the new initiatives contained in the first year of its proposals.

The manager of Chester’s Business Improvement District promised that he and his team will continue ‘making things happen’ in Chester city centre after unveiling a brand-new, five-year plan of proposed improvements ahead of a re-ballot this summer.

CH1ChesterBID Manager, Carl Critchlow, was speaking at an exclusive event for BID member businesses – of which there are nearly 500 in the city centre – at BarLounge on Watergate Street, to officially release the business plan for 2019-24.

Created following extensive consultation with businesses throughout the city centre, the plan has a strong focus on making Chester a city fit for the future through improved digital infrastructure, as well as driving more footfall; increasing dwell time and encouraging more consumer spend.

Over £2million in private sector investment would be generated for city centre improvements over the five years if CH1ChesterBID secures another ‘yes’ vote, and other plans include a host of new business forums with key stakeholders to ensure city centre businesses continue to have a powerful voice in Chester.

The implementation of a unique Chester Gift Card to further increase return visits and support both independents and high street stores is also in the plans, which have been published online here: www.ch1chesterbid.co.uk. 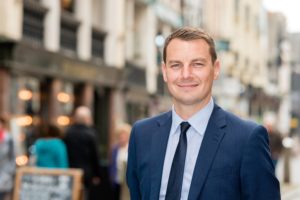 Carl Critchlow (right), CH1ChesterBID Manager, said: “Now, more than ever, our city centre businesses need a team that will support them and champion a better trading environment to ensure future success on our high street.

“Our objective over the last five years has been to enhance the city centre experience and it’s something we strongly believe we’ve accomplished.

“We’ve played a leading role in incredible events – including the annual Christmas parade and light switch on – supported the night time economy, continuously cleansed the streets and provided the city with two of its most recognisable faces – our much-loved Welcome Ambassadors – Luka and Monica. 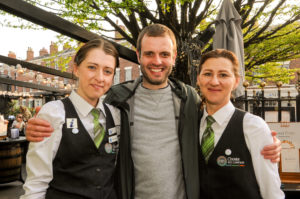 “We’ve listened to the needs of local businesses and we’ve made things happen. Now we want to build on everything we’ve achieved and do even more to benefit our local economy.”

During its first term, CH1ChesterBID, which began in 2014 and is funded by city centre businesses, has invested more than £2.5million in the city centre. The new Business Plan would see a further £2million invested to ensure that Chester continues to move forward as a vibrant and professionally managed city centre destination until 2024.

Carl continued: “Looking ahead, we’re ambitious about the future and have some really fresh ideas, as our business plan shows. Without the support of CH1ChesterBID, the city will lose out on coordinated events and marketing campaigns, city centre management clean-up initiatives, the Welcome Ambassadors and a strong voice on key city centre issues. That’s why it’s crucial that businesses take the time to register their vote and support us during the renewal ballot.”

The results of the ballot will be announced on Friday July 5, 2019. If the outcome goes in favour of CH1ChesterBID continuing, the organisation will continue its work for another five years until the end of August 2024.

For more information about CH1ChesterBID, visit www.ch1chesterbid.co.uk to view a video summarising the last five years as well as the business plan which outlines the next five years ambitions.